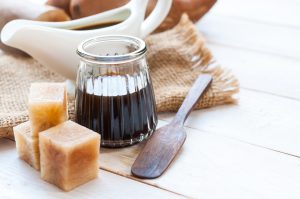 Yacon syrup comes from the roots of the yacon plant, a tuber widely grown in South America.

The sweet syrup of the Yacon plant is rich in fructooligosaccharides (FOS), a type of soluble fiber that your body is unable to digest.  This makes Yacon syrup a Keto Diet friendly sweetener because once digested, it only contains about one-third the calories of regular sugar, with just 20 calories per tablespoon (15 ml).

Furthermore, some studies show that the carbs in Yacon syrup don’t affect blood sugar the way regular sugar does.  In fact, both human and animal studies have found that yacon syrup may help reduce blood sugar and insulin   levels to promote blood sugar control.

You can use Yacon syrup as a sweetener in place of sugar in coffee, tea, cereal or salad dressings.  However, cooking with yacon syrup is not recommended, as the fructooligosaccharides can break down when exposed to high temperatures.

You can substitute Yacon syrup using an equal amount in place of other liquid sweeteners like molasses, corn syrup or cane juice.