The Keto Diet and Long-Term Weight Loss: Is it a Safe Option? 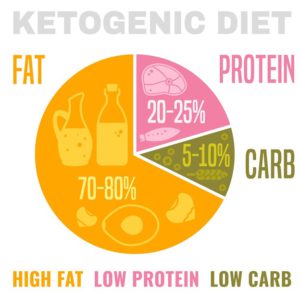 The keto diet is a low-carb diet that is high in protein and fat and places a strict limit on the amount of carbs that one may consume in their diet.

There is no question that the diet works, however there are questions about its safety and the long-term effects of the diet.

While the keto diet may induce rapid weight loss, the dietary habits and restrictions associated with the diet have been proven to be detrimental to the health of individuals and lead to chronic disease such as heart disease and some cancers.

Existing information also indicates that the keto diet can lead to nutrient deficiencies and prove difficult to sustain long-term.

This paper finds that the keto diet is not a safe or necessary option for weight loss long-term; other diets are just as effective while being more sustainable, and safer without promoting restrictive dieting.

Low-carbohydrate diets have been falling in and out of favor long before the days of the Atkins diet, a very low-carbohydrate, high-protein diet that popularized low-carb diets in the 1970s. But today, an even more strict version of low-carb dieting called the ketogenic diet is gaining popular attention as a potential weight loss strategy, sparking fierce scientific debate about its potential risks and benefits. Despite the recent attention that the diet has made in the media in regards to weight loss, the therapeutic uses of the diet date back about 100 years and include the treatment of common disorders such as epilepsy and schizophrenia (O’Connor, 2019). This technique was widely used for two decades, but its use decreased significantly with the new age of antiepileptic drug treatment. By the end of the twentieth century this treatment had been used in only a limited number of children’s hospitals (Wheless, 2008).

A typical ketogenic diet involves reducing carbohydrate levels to 10 percent or less of the total daily caloric intake, and limits protein to 20 percent, while fat makes up the rest (O’Connor, 2019). This depletion of carbohydrates places the body in a state called ketosis, a metabolic state characterized by a lack of glucose in the body. The brain demands the most glucose in a steady supply of about 120 grams daily, because it cannot store glucose. When very little carbohydrates are consumed, the body first pulls stored glucose from the liver and temporarily breaks down muscle to release glucose. If this continues for 3-4 days and glycogen, or the stored form of glucose, is fully depleted, blood levels of a hormone called insulin decrease, and the body begins to use fat as its primary source of fuel. The liver then produces substances called ketone bodies from stored fat, which can be used in the absence of glucose (Paoli et al., 2013). By breaking down fat stores directly for energy, the keto diet is well known for its ability to induce rapid weight loss.

Upon close examination of the different arguments surrounding the keto diet as a weight loss approach, it is clear that the topic is controversial. This controversial attitude is due to the number of both benefits and risks associated with the diet. This causes mixed opinions on the safety of following the diet, especially in the long term, for little is known about the diet’s long-term effects. In addition to health professionals, it is certainly not uncommon for this topic to spark discussion among the public as more and more people are trying the diet as a weight loss regimen.

Carbs Are Not the Enemy

A common misconception associated with the keto diet is that carbs are bad for you and single handedly contribute to weight gain. Weight gain however, is not caused simply by the types of food that one consumes but rather, by imbalances between calorie intake and expenditure (Hall & Guo, 2017). It is important to understand that not all carbohydrates are created equal. While there are unhealthy, processed carbohydrates such as bread, pasta, and pastries that are high in sugar and calories and can contribute to weight gain, there are also unrefined carbohydrates such as rice, oats, and fruits that provide essential nutrients to one’s diet.

To adopt the keto diet would mean almost entirely excluding a food group from one’s diet, giving up essential nutrients and most importantly, fiber. In an article published in JAMA Internal Medicine, the authors wrote, “The greatest risk, however, of the ketogenic diet may be the one most overlooked: the opportunity cost of not eating high-fiber, unrefined carbohydrates. Whole grains, fruits, and legumes are some of the most health-promoting foods on the planet. They are not responsible for the epidemics of type 2 diabetes or obesity, and their avoidance may do harm” (Joshi et al., 2019). Further supporting this claim, a systematic review and meta-analysis of 45 prospective studies published in the BMJ found that whole grain intake was associated with a reduction in the risk of chronic diseases such as coronary heart disease, cardiovascular disease, total cancer, and all-cause mortality (Aune et al., 2016). These findings support dietary guidelines which recommend increased whole grain intake to reduce the risk of chronic disease and premature mortality.

Radical diets, such as the keto diet, are known to cause weight loss; however, recent studies suggest that the intense fat consumption needed to get the body into ketosis may also have negative effects. Just as all carbs are not created equal, neither are fats. Unfortunately, some people see the ketogenic diet’s emphasis on high-fat foods as an excuse to adopt unhealthy eating habits. Because of this false notion, it is not uncommon to see eating habits such as over-indulging in processed meats and saturated fats, which has proven to be dangerous. A 2015 review published in Nutritional Neuroscience found that the keto diet can increase the risk of diabetes and heart attack (Lima et al., 2015). Another meta-analysis published in the British Journal of Medicine in 2013 evaluated ketogenic diets versus low-fat diets for long-term weight loss. It found that keto works for weight loss short-term and may lower blood pressure, but it can also increase LDL cholesterol (Bueno et al., 2013). However, the authors acknowledge that their research analysis neglects to observe important health indicators including liver function, vascular function, cardiovascular events, and kidney function. In other words, the harm that ketogenic diets can cause in the long term isn’t necessarily known.

An increase in the consumption of saturated fats found in foods commonly consumed on the keto diet, including processed meats, whole fat dairy products and tropical oils such as coconut oil, has been found to be directly related to increases in low-density lipoprotein (LDL) cholesterol. LDL cholesterol is often referred to as the “bad” cholesterol because it collects in the walls of blood vessels and is commonly associated with an increase in the risk for health complications such as heart attack and stroke. In an article published in Annals of Nutrition and Metabolism, it is stated that saturated fat consumption was found to significantly increase the plasma concentration of LDL cholesterol compared with mixed carbohydrates and cis-unsaturated fatty acids, potentially increasing the risk of coronary heart disease (CHD) and cardiovascular disease (CVD) (Nettleton et al., 2017). According to Nettleton et al., (2017) this “bad” cholesterol was found to be directly related to increased risk of coronary heart disease (CHD) and it is strongly advised to avoid foods high in saturated fat as its avoidance is shown to lower LDL cholesterol and reduce the risk for CHD.

A Gap in the Research

There have been many studies on the keto diet over the years; however, most have been small and of fairly short durations of about 12 weeks. It is not uncommon for the public to be mistaken when it comes to understanding what research is available to them and what the research has to say in regards to ketogenic diets. Many people will claim that there is “a ton of research” on the keto diet and that that alone suffices for ensuring the efficacy and safety of the diet. However, while there is some research on the diet, not much research has been conducted in regards to the long-term effects on overall health and weight maintenance. The best studies that have been conducted on the keto diet for more than one year looked at the impact of the diet on pediatric seizure disorders, not on the diet as a weight loss approach. In these cases, the benefits for treating epilepsy outweigh the potential risks; however, a 10-year study conducted on the effects of keto in the management of epilepsy in children found side effects including constipation, high triglycerides, high cholesterol, diarrhea, lethargy, iron deficiency, and vomiting (Wibisono et al., 2015).

A recent study on mice and the ketogenic diet published in Nature Metabolism suggests that the keto diet could improve human health over limited time periods by lowering the risk of diabetes and inflammation. On the other hand, it was also proven that negative effects were produced after about a week. It was found that when mice continued to eat the high-fat, low-carb diet beyond one week, they consumed more fat than they could burn, and developed diabetes and obesity as a result (Goldberg et al., 2020). The researchers also present an important first step toward possible clinical trials in humans by stating, “Before such a diet can be prescribed, a large clinical trial in controlled conditions is necessary to understand the mechanism behind metabolic and immunological benefits or any potential harm to individuals who are overweight and pre-diabetic” (Goldberg et al., 2020). This suggests that based on their findings, further research is necessary to determine the safety of the keto diet in the long term and until then, the diet should not be recommended as a long-term weight loss regimen.

Despite the growing hype that continues to surround the keto diet, it is clear that more long-term human clinical trials are required to support the anecdotal claims on the health benefits of the diet. In addition to a gap in the research in regards to the long-term effects of the diet, the risks associated with the diet are also relevant. Numerous studies conducted on the diet have offered results suggesting an increased risk for health complications such as coronary heart disease, cardiovascular disease, total cancer, and all-cause mortality. Additionally, common side effects of the diet include constipation, high triglycerides, high cholesterol, diarrhea, lethargy, iron deficiency, and vomiting. The bottom line is, not enough is known about the potential health risks associated with the diet by adopting it in the long term and even the short-term effects have proven to be largely negative. The lack of sustainability of the diet is also attributed to the restrictive fashion of the diet in which people are consuming an extremely low amount of carbohydrates in their diet, about 10% or less of their daily caloric intake. The opportunity costs of eliminating this food group also include a loss of key nutrients and fiber which offer important health benefits. In order for individuals to make real, long-term changes in their health, weight and overall wellness, they cannot rely on restriction in their daily lives, as this leads to an unhealthy relationship with food. When considering adopting a diet, it is necessary to approach health and weight loss with an understanding of one’s own lifestyle, and work towards developing healthier eating habits through behavior changes that last a lifetime.