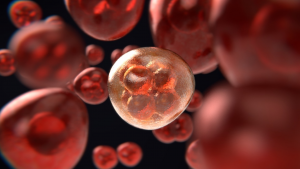 As early as 500 bc, fasting was used as an effective treatment for many medical ailments. Fasting continued into modern times, and in 1910, Guelpa and Marie proposed fasting as an antiepilepsy treatment. In 1921, Woodyatt noted that starvation or use of high-fat, low-carbohydrate diets in individuals with no significant medical comorbidities yielded acetone and β-hydroxybutyrate, 2 energy sources produced by the liver in the absence of glucose. A low-carbohydrate, high-fat diet was thought to be an alternative to fasting or starvation, having many of the same desired effects while continuing to nourish healthy cells. The term ketogenic diet (KD) was later coined by Wilder and Peterman, who formulated the fat-to-carbohydrate ratio that is still used today: 1 g protein per kg of body weight in children and 10 to 15 g carbohydrates daily, and fat for the remainder of calories. Both investigators reported that this diet improved their patients’ mentation and cognition.1

Use of the keto diet as an adjuvant to cancer therapy also began to emerge. In 1922, Braunstein noted that glucose disappeared from the urine of patients with diabetes after they were diagnosed with cancer, suggesting that glucose is recruited to cancerous areas where it is consumed at higher than normal rates. During that same time, Nobel laureate Otto Warburg found that cancer cells thrive on glycolysis, producing high lactate levels, even in the presence of abundant oxygen. Warburg conducted many in vitro and animal experiments demonstrating this outcome, known as the Warburg effect.

By the mid-20th century, keto diet use in epilepsy treatment and cancer research had waned. However, in the mid-to-late 1990s, with the establishment of the Charlie Foundation, the diet slowly started regaining recognition. 1 Results of many in vitro and animal studies were reported, and human data also began to accumulate.

Glucose normally stimulates pancreatic β cells to release insulin, which allows glucose to enter cells and provide energy. With high carbohydrate and glucose intake, the pancreas increasingly secretes more insulin, which promotes the interaction of growth hormone receptors and growth hormones to produce insulin-like growth factor 1 (IGF-1) in the liver—promoting cell growth and proliferation, which can be detrimental to patients with cancer. Overexpression of glucose transporters 1 and 3 (Glut-1, Glut-3) also occurs in many cancers and corresponds to the degree of glucose uptake in aggressive tumors, as seen on positron emission tomography (PET).2 Overexpression of hexokinase, the rate-limiting enzyme of glycolysis, further drives production of pyruvate and lactate, which cause reactive oxygen species damage. Translocation of the hexokinase rate-limiting enzyme from the cytosol into the outer mitochondrial membrane, where it interacts with voltage-dependent anion channels, can disrupt caspase-dependent cytochrome release, which suppresses the apoptotic pathways of cancer cells and makes cancer more resistant to chemotherapy.3

When glucose is scarce, the body senses the need to make an alternative form of energy for cells. The liver then produces ketones and fatty acids, which provide for normal cells but do not benefit cancer cells. Cancer cells have dysfunctional mitochondria and possibly electron transport chain defects, which disrupt normal adenosine triphosphate (ATP) production from the mitochondria. The result is that the cancer cells become heavily dependent on ATP coming from the less efficient process of glycolysis (Figure 1).

Ketogenic diets mimic the fasting state, wherein the body responds to the lack of glucose by producing ketones for energy. Excess lactate production, which is part of the Warburg effect, compensates for ATP production defects caused by dysfunctional mitochondrial oxidative phosphorylation.2,4The resulting tumor dependence on glucose can be exploited with KD use. Ketogenic diets selectively starve tumors by providing the fat and protein that otherwise could not be used by glucose-dependent tumor cells.

There are concerns about providing protein to patients who are at risk for renal problems. However, mouse models of diabetic nephropathy showed improved renal function with KD use. The hypothesis was that KD use, which produces prolonged elevated 3-β-hydroxybutyric acid levels, also reduces molecular responses to glucose and consequently reduces renal damage.6 Use of the diet also reduced pain and inflammation in both juvenile and adult rats. Mechanisms of action were thought to be reduced reactive oxygen species and increased central adenosine levels.7,8