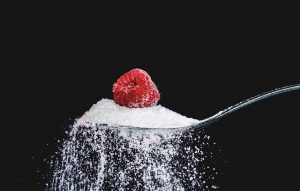 Recent studies  show that sugar and dopamine are heavily linked. When an individual eats sugar, the brain produces huge surges of dopamine. Researchers think that this might be because our bodies have adapted over time to seek out foods that are high in calories. For most of human history, it was important to eat a lot of calories in order to survive. With modern food technology and the widespread availability of high-calorie foods, at least in western nations, this is no longer necessary for survival.

However, our brains and evolution haven’t yet caught up with this shift. Our brains still perceive sugar as beneficial and release huge amounts of dopamine when we consume sugar-dense, high-calorie foods. In the long term, this can mimic the effects of addiction and create high tolerance and cravings for sugar. Furthermore, this can even lead to withdrawal when we cut it out of our diets. Consequently, it can be quite difficult to resist the urge to consume sweets, such as candy and cake.

For alcoholics and addicts , sugar cravings may be especially intense in early sobriety. This is due to a few reasons. Alcohol has a high sugar content, so alcoholics’ bodies and brains are adjusted to a high level of sugar from daily or frequent drinking. When alcoholics get sober, the brain is deprived of the normal daily sugar rushes to which it became accustomed. This can create intense cravings for sugar, and many alcoholics report over consumption of candy and sweets during this adjustment period. Addicts who are used to another drug of choice, such as heroin, may miss the high dopamine levels produced by substances, especially in early recovery. The loss of the dopamine rush from drugs can cause the brain to crave a substitute, such as sugary foods that produce dopamine.