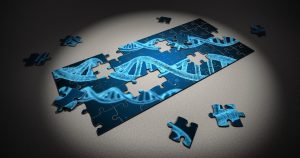 Genes influence every aspect of human physiology, development, and adaptation. Obesity is no exception. Yet relatively little is known regarding the specific genes that contribute to obesity and the scale of so-called “genetic environment interactions” the complex interplay between our genetic makeup and our life experiences.

In the 21st century, obesity is a health problem affecting rich and poor, educated and uneducated, Westernized and non-Westernized societies. Body fat level varies from person to person, however, and some people have always tended to carry a bit more body fat than others. Evidence from animal models, human linkage studies, twin studies, and association studies of large populations suggests that this variation in our susceptibility to obesity has a genetic component. But rather than being controlled by a single gene, susceptibility to common obesity is thought to be affected by many genes.

In 2007, researchers using genome-wide association studies identified the first obesity related gene variants in the so-called “fat mass and obesity-associated” (FTO) gene on chromosome 16. (1,2) These gene variants are fairly common, and people who carry one have a 20 to 30 percent higher risk of obesity than people who do not.

To date, genome-wide association studies have identified more than 30 candidate genes on 12 chromosomes that are associated with body mass index. (4-6)

In August, we will focus on one of the most important environmental factors affecting our diet and waistline, stress.  Harvard researchers have reported that stress from work and other sorts of problems correlates with weight gain, but only in those who were overweight at the beginning of the study period. One theory is that overweight people have elevated insulin levels, and stress-related weight gain is more likely to occur in the presence of high insulin.